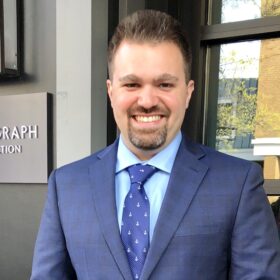 Following advanced studies in Civil Engineering at Cooper Union College, Matthew graduated from New York Maritime College with a degree in Naval Architecture.  Since 2013, he has become an integral part of the T&T team providing engineering, project management, logistics, planning, cost analysis and operational support. He has managed and been actively involved in large scale salvage and emergency response operations in the US and abroad. In coordination with T&T’s salvage team, Matthew has developed Salvage and Operations Plans that have been approved and reviewed by the United States Coast Guard, class societies, local and international authorities and marine surveyors. Of note, is Matt’s leadership during T&T Salvage’s successful removal of the GOLDEN RAY wreck. He served as one of the two lead project managers of the project, working closely with the UNIFIED COMMAND, USCG and other stakeholders from tendering to completion.

Matthew is one of the facilitators of the Mega-Boxship Solutions Technical Working Committee as which seeks to catalyze industry-driven prevention and response solutions.